Pictures from the show!

I finally found the pictures of the Alice in Wonderland play! It been a long time coming but i’m glad to finally be able to put them up. I look at it as possibly the greatest accomplishment in my artistic career since deciding what i wanted to do. Looking at it now i know i could have done better. I’m realizing all the things about it i should have changed when i had the chance. It may not be my best but somehow i feel like i’ll always be proud of this one. 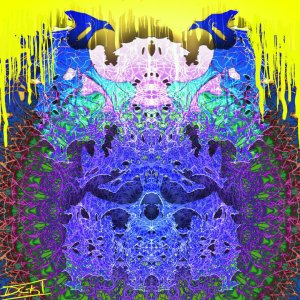 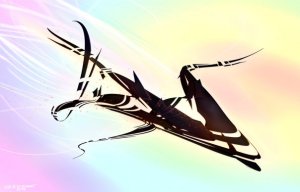 What was i thinking?! (Jam-tronica Cont..)

I showed my friend the work i had done for him the day after my last post. I wanted to see if it met his expectations. This turned out to be a good idea. Needless to say, he didn’t like it much, i could tell. Said he’d “Talk it over with the band.” Uh oh, you know what that means…

I decided to go in a totally different direction thinking something abstract and tripy would be more up his ally. I showed him some earlier work of mine, and after telling me he liked it ’10x better’, started fooling around in PS until i had something fun looking. 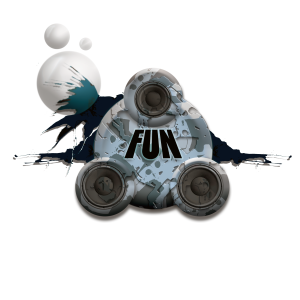 It was certainly fun to make, but If it were up to me, i wouldn’t have put the text in there. Still, the customer is always right.

Oh wait im not getting paid for this…

Oh well. If i was only interested in $$$ i would have been a Jewel-thief.

Kay, so I wanted to post all of my artwork up here a while back but while downloading ‘Repo Men’ from pirate bay i unleashed a particularly nasty Trojan onto my computer. Despite my feverish attempts to get rid of the virus, in the end, i had to re-format and in doing so lost everything. 15gb worth of videos from my trip to Germany a few summers ago, 17 days worth of music, all of my downloaded software, not to mention all of my original artwork files… The list goes on.

Thankfully all the art i was proud enough of to display at the career-day thing at school last semester is safely stored on my flash drive in a power point slide show. I don’t have access to many of the PSDs anymore but at least i can still present the best of last semesters work. (jepegs of which will be up shortly i hope)

Anyway, more importantly, a friend from school asked me if i would make up some art for his bands album cover. Im not getting paid but this is fine with me. Im actually really stoked he asked me since we’ve been out of contact for a while and the album sounds pretty legit. Who knows how many people will see it. Pressures on.

Their band is called The Fundimensionals, and they play jam-tronica. I wasn’t sure what that was before looking it up and was surprised to see a few of my favorite groups were labeled under the same genre. Disco Biscuits being one of them. Check out their Myspace page here.

I didn’t think of looking them up on Google until after i did the work below but i think it still fits. Being able to listen to them while working is a great source of inspiration and in my opinion helps to link the emotion of the illustration with that of the music.

So before beginning I went online and found some awesome CD cover/tray templates. Free to download and simple to use.  Link here.

My friends requirements are that the cover say ‘FUN’ somewhere and that the artwork be centered around that idea. Sounds good, lots of creative freedom. ;P Deadline is the sept. 20th, im gonna shoot for the 18th.

The idea i went for is like a retro, board-game advertisement. Mom is presenting the kids with a FUN new toy/game/tray of cookies… idk yet. A couple hours and several cigarettes later i had this… 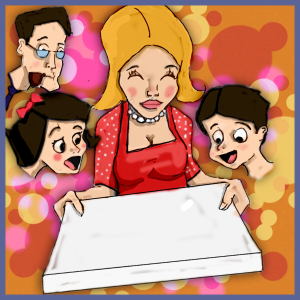 Drop shadows and shading were applied to the happy family which now includes dad peeking his head around to see what all the commotion is about. He is slightly intrigued. The background and skin-tones were added quickly just to get a sense of how it will look at the end. Not sure what will go on the Box. Its too late…err early, to think about it. Sleep now, box later. 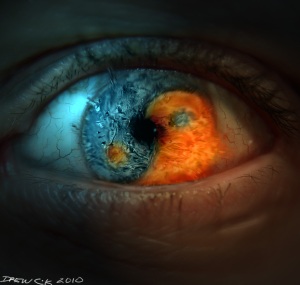 One of my most recent photo-manipulation pieces done for my brother-in-law. Its going to be the cover image for a script hes writing. I will post a link to his site when i remember what it is.

This was a lot of fun to do. Since i usually only do illustrations and start off working with stuff i scan in, i was able to take a break from that and try something new. I love how it turned out and have gotten some good feedback from my friends so this ones a win. Surprisingly less frustrating than drawing…  High res images are a MUST to work with. A low res version of the same images would look a lot less powerful i think.

So as the semester comes to a close and the mad dash to get my projects finished and in on time seems at an end. I must cut my losses and stick to goals i know i can accomplish. Im talking of course about the complexities of actionscripting. Jericho is just about finished, or at least the three scenes that i wanted to do this semester are all linked together in flash, with spiffy animations and transitions. I had high hopes for the preliminary scenes of Jericho but looking back now i see them for what they truly were. Delusions of grandeur.

My quest was to discover how to create an inventory with which items found in the game world could be dragged and then dropped (and then snap) to a grid. Or, an inventory with designated slots. The items would then stay in this inventory until the player called upon them again. This proved to be to complicated to figure out myself, at least for the time i had. So i did my best and presented it to class without the inventory feature and was relieved to find i wasn’t the only one who bit off more than they could chew. Anyway, maybe next semester i’ll go more into flash, but for the time being Action script will have to wait.